On Tuesday 21 October, as the tail end of Hurricane Gonzalo swept through the UK, I joined Professor Ian Jones, Director of the National Centre for Mental Health, at the House of Commons. We were there to support the launch of the report: Maternal Mental Health – the Economic Case For Action.

The paper outlines the economic and social impact of maternal mental health problems in the perinatal period. It does not make for easy reading.

The truth is that up to 20% of women develop a mental health problem during pregnancy or within a year of giving birth (the perinatal period) and suicide is a leading cause of death during this period.

This is a time in our lives, as women, where good mental health is vital in readying ourselves for motherhood, for caring, feeding, changing, washing and ultimately being responsible for the growth – physically and mentally – of another human life. It is also the time in our lives when we are most at risk of suffering with mental illness.

Yet despite mental health issues being both common and crippling for mothers, babies and families, access to perinatal Psychiatry varies enormously throughout the UK. Women in around half of the UK have no access to specialist perinatal mental services at all.

The scarcity of Mother and Baby Units in the UK means that, for many women, admission to hospital is associated with separation from families and support networks by long distances.

We need to support women in making difficult decisions about medication, we need to ensure that women get the right advice and are supported by specialist teams throughout pregnancy and in motherhood. And we need to ensure women are not disadvantaged by a postcode lottery. To achieve this we need to raise the profile of maternal mental health and we need government support and funding.

Maternal mental health services need to be developed so that all women get equal access to specialist services throughout the UK and so provision of care is based on necessity, the original remit of the National Health Service back in 1948, and so that this map turns green. 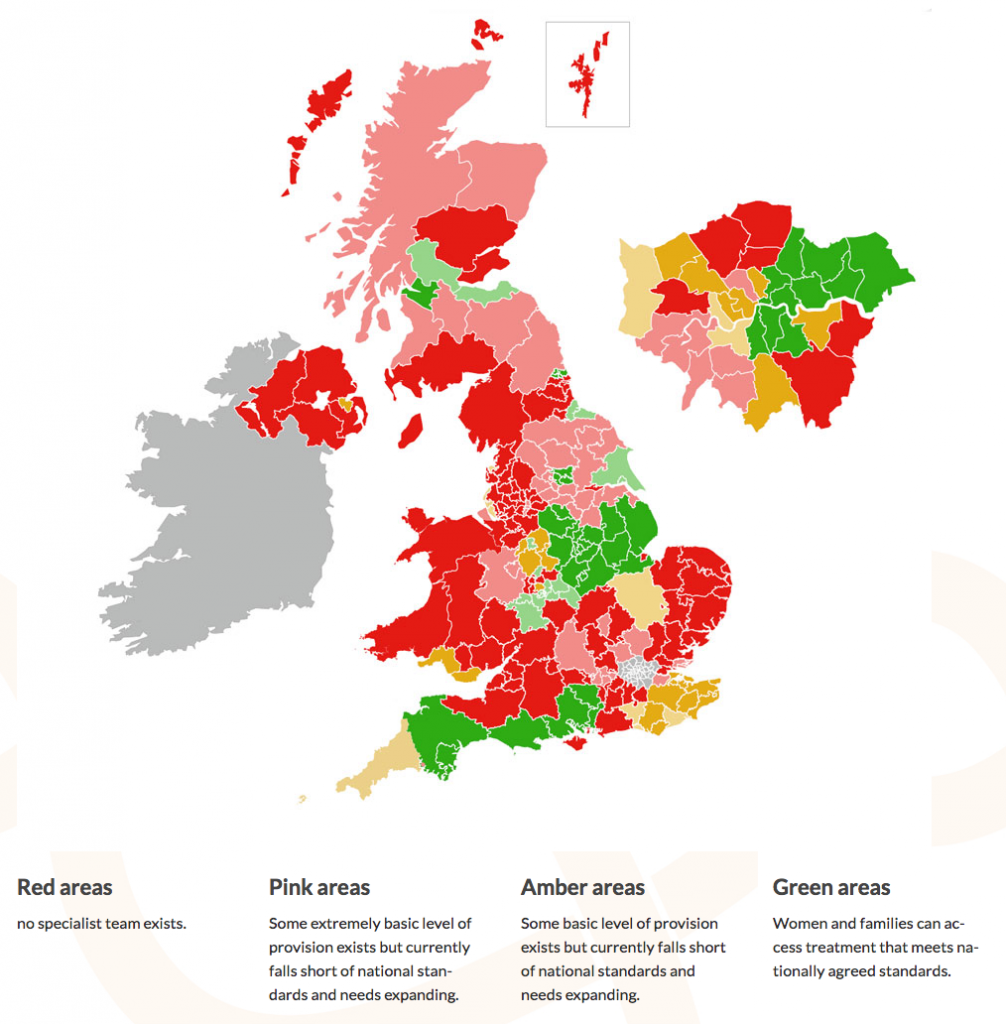 But while there are mountains to climb, some good work has been done already. The National Institute of Clinical Excellence has written guidance on antenatal and postnatal mental health care, standards have been set by the Perinatal Quality Network. Several areas have developed services in line with these standards, some of which have been awarded “excellent” status.

The Maternal Mental Health Alliance (MMHA) has also been formed – a coalition of more than 60 UK organisations such as professional bodies and 3rd sector groups, and including many women with their own lived experience of horrifying and traumatic real life stories of mental illness in the perinatal period.

But we need more, and that’s what brought us, on a blustery autumnal day in October, to the Houses of Parliament.

With funding from Comic Relief, the MMHA commissioned the London School of Economics to write an independent report documenting the economic costs of perinatal mental illness for UK society as part of their Everyone’s Business Campaign.

The report, launched on Tuesday this week (21 October), reveals that the financial burden of maternal mental illness stands at an estimated £8.1 billion for each one-year cohort of births in the UK.

In comparison it would cost only an extra £280 million a year to create and develop services in line with national guidance.

An evening event was hosted by MP Graham Allen, and featured an encouraging speech by Dr Daniel Poulter, MP for Central Suffolk and North Ipswich and Parliamentary Under Secretary of State in the Department of Health, followed by a heartfelt speech by MP Andrea Leadsom.

It genuinely felt like the people who mattered, the people who have the power to make changes, to raise the profile at a political level and find the financial resources to improve and develop services across the UK, were really listening. I left feeling optimistic that the report had made a real difference.

Dr Sarah Jones is Clinical Fellow at the National Centre for Mental Health, working to promote the centre’s research among fellow clinicians and health professionals.