In the run up to University Mental Health Day the Wales Student Psychiatry Society teamed up with NCMH to open a competition asking students to get inspired by mental health and create a piece of original artwork.

The evening began with a wine reception in the Hadyn Ellis building, where guests were invited to browse the entries of the competition before moving to the lecture theatre for a film viewing and a series of short talks.

The entries were judged by Natalie ‘Tilly’ Ellis, the medical student behind the competition; Laura Dernie, a research champion for NCMH and creator of My Discombobulated Brain, Dr Liz Forty, psychologist, and Dr James Walters, psychiatrist. 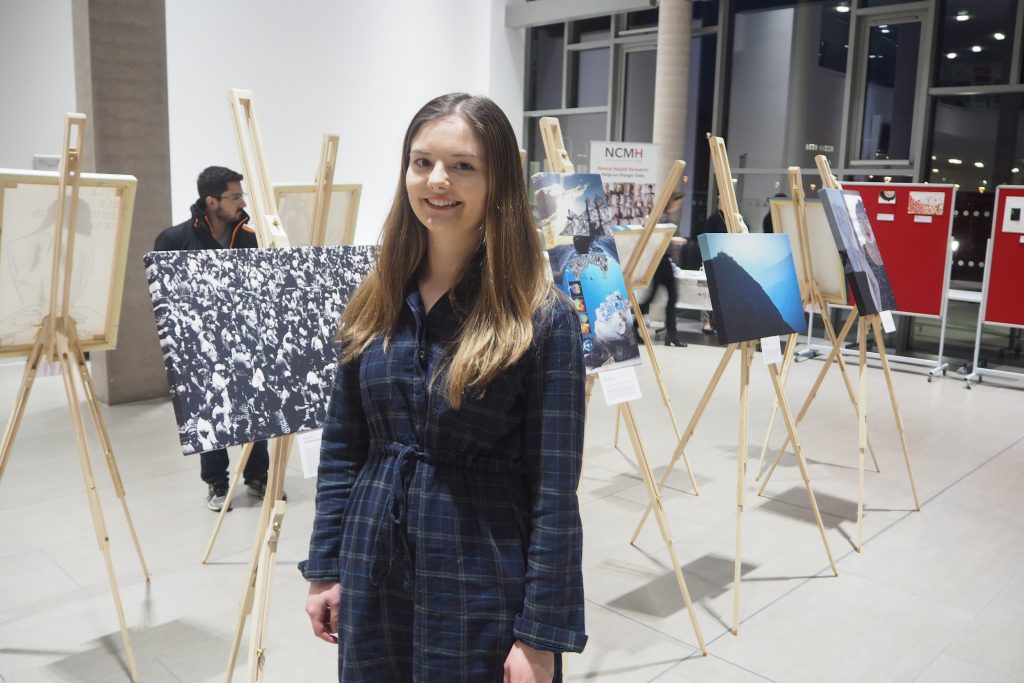 Tilly, pictured above, explained, “I was so thrilled with the variety of entries to the competition. People had used so many different mediums and so much thought and emotion had gone into the pieces. The other judges and I were really impressed with the quality of the entries and it was a tough decision as we all identified strongly with different pieces.”

Tilly was inspired to open the competition following taking part in the C21 Medical School artwork competition for three years running, in which there were always many inspiring pieces about mental health. Further motivation for the idea was provided by her project with fellow medical student Munzir Quraishy during which they filmed the documentary ‘How are you?’.

‘How are you?’ won Best Short Film at the International Film Festival of Wales 2016. The film looks at how the stigma of mental health can make the struggles of mental illness even worse. Three people talk about their stories of illness, how stigma affected them and how we can beat stigma.

The film was made as part of the MBBCh Medicine curriculum. Each year students are given the opportunity to explore in-depth areas of medicine which are of particular interest to them.

For more information about the exhibition please contact Catrin Hopkins hopkinsc7@cardiff.ac.uk or call 02920 688476