My complex PTSD and how I recovered from it

This weekend marks PTSD Awareness Day. Michael tells us his story about his experience with Complex PTSD and how he manages it.

Please note: the following story includes a reference to suicide.

My story starts in 2015 where I was keeping a secret.

I would put my “happy face” on every day but deep down I was in despair. I almost always felt like everyone seemed so much more comfortable with themselves than I was.

I felt crushed by a real sense of inadequacy, but I couldn’t really work out what was wrong with me.

It was exhausting, and disturbing thoughts would often creep in. Some of those thoughts were x-rated and very upsetting, they were of sadomasochistic nature. Additionally, I’d often have repetitive dreams about being abandoned.

I was very sad, confused and exhausted.

One day, I suddenly had the urge to jump out of a high window, and it was then I realised that I had to do something.

A bit of research online led me to psychotherapy. I swallowed my pride and went to a therapist. Doing so was one of the most important steps I could’ve taken.

After a few therapy sessions, I realised I had deep emotional insecurities, stemming from my upbringing.

It soon struck me that my relationship with my mother wasn’t what I had always thought it was. I realised I felt that I was a burden to my mother.

Shame is very different from guilt. Guilt is, “I have done something bad”, whereas shame is, “I am bad”.

Shame was the key emotion.

My mother used me for emotional support when I was young, which was very confusing to say the least.

I began to imagine what my mother was really thinking back then, “You are such a burden to me but you are also my saviour. I can unload all my distress and worries on to you because you will never leave me.”

This, I discovered, is known as maternal enmeshment.

One day I was suddenly cast aside by my mother for my younger brother. Yes, I had been “dumped” by my own mother.

The sense of betrayal at an early age stuck with me and had rather comical effects later in life, as you can see:

My therapist and I discussed my relationship with my father too, which was characterised by him never having time for me but had plenty of time for others.

I would think, “I’m obviously not worthy enough for my father’s attention. There must be something wrong with me but I’m too stupid to work out what it is, although everybody else is aware of it. I feel humiliated.”

Nevertheless, I would place my father on a pedestal and was desperate for his admiration and attention.

Out of desperation I would make up positive stories about him while being in complete denial: 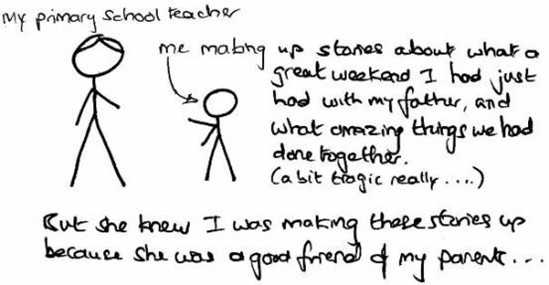 My mother would also perpetuate fear in me about my father, which created a very distorted and threatening image of my father in my mind.

Apparently I would often scream and refuse to be in the same car as him.

However, I learned that a child’s view of things is naturally ego-centric, so I blamed myself intensely for my parents’ apparent disgust of me.

Dealing with my emotions as an adult

When I started therapy it felt like there was a huge granite block in my mind that was standing in the way of my progress. It was a strange feeling.

Some of the themes I discussed in therapy included affirmation, autonomy, self-respect, existential fear, illegitimacy, sexual perversion, abandonment, depression, shame and so many more.

The aim of my therapy was to drill down through all these ‘floors’ of emotions, dig to the foundations and rebuild from the bottom up.

With that, I realised the importance of trying to connect emotionally with myself, especially with my inner child.

Therapy brought all repressed emotions, feelings and memories from my subconscious self to my conscious self, allowing me to reassess, reinterpret, understand and re-frame them in a proper and rational manner.

I imagined confronting my parents about my fear of them, and mentally practised being assertive with them, as both an adult and child.

Imagining confronting them as an adult was relatively easy, but then I found I had to imagine myself as a small boy again, confronting them when I was younger, all those years ago, as a scared child. This was a lot more difficult but also very rewarding and liberating.

As you can see, I also find it really helpful to draw what I went through and what I’m still going through.

I’m relieved to say that I’m well on the road to recovery, so I’ll leave you with my own acronym and five-step process to help you deal with your experience. I call it the ‘FRESH’ approach:

Find a suitable therapist.
Record all your feelings by writing them down.
Examine your anxieties, fears, doubts and insecurities in detail.
Sketch and draw your thoughts to clarify your progress.
Harvest all of this information until you feel good about yourself.

Michael Davitt is an author focusing on mental health issues. He has published five books to-date under his author pseudonym, Luke Pemberton. His books are based around a series of his drawings illustrating how he experienced, and then recovered from, Complex-PTSD stemming from emotional neglect in childhood.