RAPID was a research trial designed to determine if guided self-help is as effective for the treatment of post-traumatic stress disorder (PTSD) as face-to-face cognitive behavioural therapy with a trauma focus (CBT-TF).

The reasons behind RAPID

After the team had collected and evaluated their results from the four-year study, a webinar was held with participants, their families and other people involved to discuss RAPID’s findings.

Typical PTSD treatment involves 12-16 hours of face-to-face meetings with a therapist, which can take time to access due to long waiting lists.

In 2005, the National Institute for Health and Care Excellence (NICE) recommended the need for more research to identify different ways to treat PTSD.

Development began in collaboration with NHS Wales on a guided self-help (GSH) programme for the treatment of mild-to-moderate PTSD.

Spring, an online GSH step-by-step treatment, was developed with people with lived experience of PTSD. 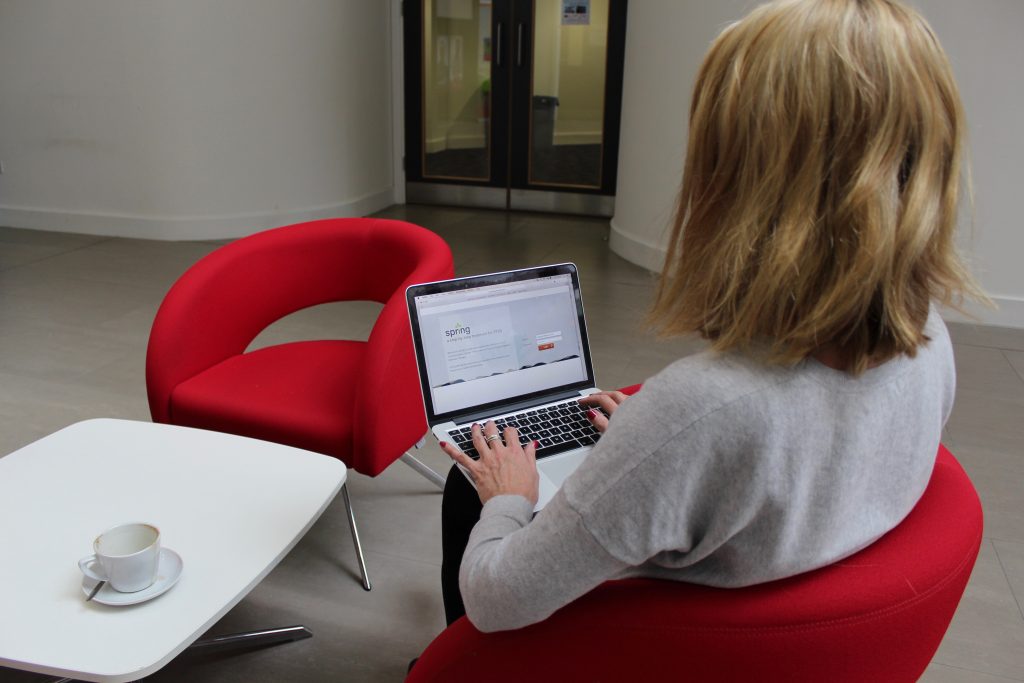 RAPID was funded to help determine if it was as effective as face-to-face cognitive behavioural therapy with a trauma focus (CBT-TF) whilst having the potential to reduce waiting times and enable flexible access.

“With RAPID, we wanted to describe the experience of receiving self-help from the recipient’s perspective and delivering it from the therapist’s perspective.

“We also wanted to discuss cost-effectiveness and to determine if specific factors may impact effectiveness, and successful roll-out of guided self-help for PTSD in the NHS if it proved to be successful.”

The study involved a number of key stakeholders including the NHS, which was critical in recruiting participants in England, Scotland and Wales.

Every participant in RAPID was eligible for, and seeking, treatment in the NHS.

Watch a summary of the study

The importance of public involvement in research

We’re all keen to work to avoid the stigma that PTSD can have to some people.

“We’ve had input into so much: patient information, website; we’ve contributed blogs, we’ve done press and media work to broaden the reach of what we’re doing. At every opportunity, we’ve been included.

“Co-production has been at its very heart.” 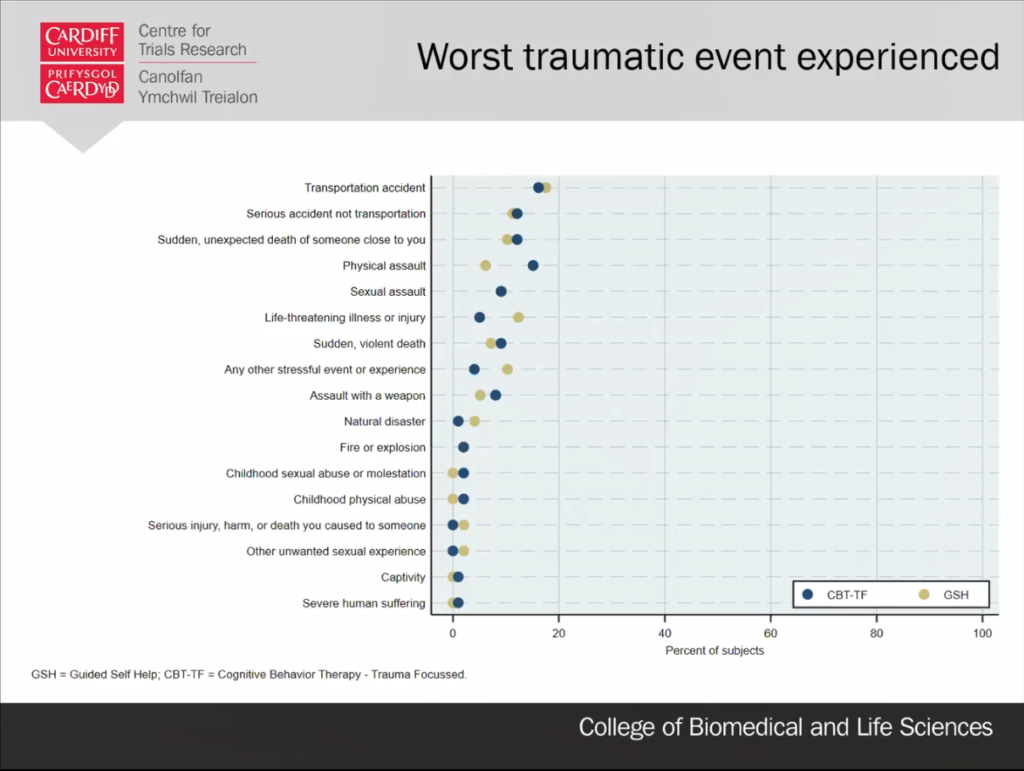 Analysis shows Spring is as effective as CBT-TF

Cono Ariti, Research Fellow and RAPID statistician, took over to talk about the statistical findings of the trial.

The primary analysis of the trial concluded that GSH was found to be as effective as CBT-TF.

Secondary analyses also showed evidence of non-inferiority across other domains of participant outcomes.

He said, “We don’t fundamentally believe that guided self-help will be superior to CBT-TF, but rather that it will be no worse than it.”

Analysis goals sought to determine whether the treatment had different effects for different groups.

For example, males versus females and whether there were differences in the trial pre-pandemic versus during the pandemic.

Cono said, “In terms of the baseline demographics, there were 64% female and 36% male. The median age was 32.”

The ‘worst traumatic event experienced’ reported among participants was revealed to be an accident of some kind (29%), followed by a sudden, unexpected death of someone close (11%).

Other categories included physical assault, sexual assault and a life-threatening injury or illness.

Additional exploratory analysis was conducted to examine if there were treatment differences between specific groups, for example, males and females and whether there were differences in the trial pre-pandemic versus during the pandemic.

No subgroup showed any evidence of treatment differences between the GSH and CBT-TF groups.

The cost of therapy

Katherine Cullen, RAPID Health Economist of Swansea University, set out to determine the costs associated with GSH compared with CBT.

Costs included the website and app running costs for GSH, staff training time and supervision for each intervention, the costs of any additional therapy, primary and community health and social care, and of hospital care over the whole trial. 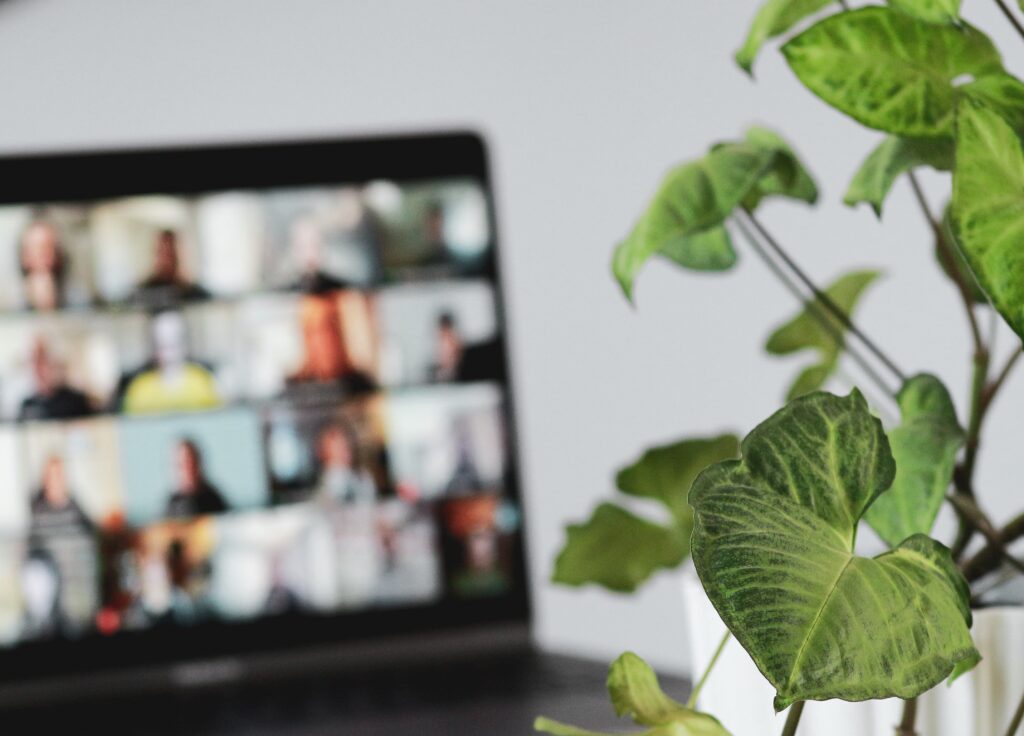 The average cost of Spring guided self-help was about £277 compared to £729 for face-to-face CBT, and that is per person. The main driver of that was probably the face-to-face therapy time.

“The results show us that the use of guided self-help is cost-saving versus face-to-face therapy, with a saving likely to be £500 per person.

“Here we have a therapy that’s cost-saving and freeing-up resources,” she concluded.

Thoughts from the participants of RAPID

39 participants took part in interviews and a total of 54 interviews were conducted with patients and therapists before and after intervention delivery, and with NHS commissioners and managers.

When you go to an appointment you usually have to put aside two-to-three hours. But [GSH] was a phone call. You can do the phone call and then carry on with your day.

Luke talked about the therapeutic relationship, “[The therapist] was brilliant. He made me feel comfortable… He made me open up and really get into the accident.”

The outcome, for some, proved positive. Emma said, “My understanding of PTSD has certainly been broadened and deepened because I now understand what I was experiencing.”

However, Kim highlighted the challenges of GSH therapy, which doesn’t suit everyone.

Some found it hard to make the time for self-help or concentrate, depending on the severity of their PTSD.

It was also suggested that the use of an app at home may not be appropriate for those they live with.

Overall, although there was a preference for face-to-face treatment, GSH was seen as positive and helpful among participants.

Professor Bisson concluded: “I just want to say a massive thank you to the research team and most of all, of course, the RAPID participants for taking part.”

Work is already underway to broaden the offer of this new treatment to more people with PTSD.

The study was funded by the UK National Institute for Health Research Health Technology Assessment programme. The NHS costs of the study were funded by the Welsh Government through Health and Care Research Wales.