Only recognised by the World Health Organisation in 2019, PMDD is a severely under-researched condition. Our researchers at NCMH and Cardiff University are pleased to be working with charity partners to raise awareness, reduce the stigma and improve support for the condition.

This blog contains reference to suicide.

On Monday 10 October, Professor di Florio hosted a webinar in partnership with the International Association for Premenstrual Disorders (IAPMD)- a global organisation that aims to provide peer support, education, research, and advocacy for premenstrual disorders.

We were joined by people all over the world for the webinar that discussed various misconceptions surrounding PMDD. Professor di Florio offered a data/ research led perspective, and we welcomed Laura Murphy, Director of Education and Awareness from the IAPMD who shared her own lived experience of the condition and her work with the organisation. 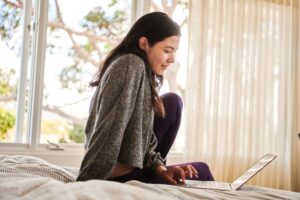 NCMH psychology assistant Chloe Apsey, who is also working on PreDDICT, provided a general overview of PMDD and the menstrual cycle:

The phase of the menstrual cycle where most people begin to experience symptoms of PMDD is the luteal phase – the days between ovulation and menstrual bleeding – lasting twelve to fourteen days and characterised by high levels of progesterone.

PMDD symptoms can include:

Chloe Apsey noted that though PMDD can impact anyone who experiences a menstrual cycle, most of the literature that will be discussed recruited participants who identify as women. For information regarding the experiences of transgender people with PMDD, click here.

Professor di Florio then introduced Laura Murphy from IAPMD and invited her to share her own experiences of the condition.

“I was seventeen years old when I first started the contraceptive pill, and on day twenty-one when I stopped taking it for the required break, I believe my hormone levels dropped significantly and my mental health hit the floor,” Laura noted of her first experiences of hormonal mental ill-health.

It was a running joke in my university house that I could get angry, tired, and irritable around the time of my period. But I never really made that link between my cycle and my mood”.

Professor di Florio asked Laura what led her to think that she was experiencing PMDD.

“PMDD was first picked up on by my counsellor, which led to numerous GP visits and symptom dismissals”. 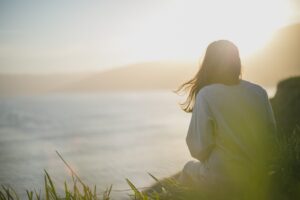 “I’d spent a lot of time accepting my symptoms as just the way I am, that I just couldn’t cope with life like everyone else, that I’m broken”.

It was validating to know there were others like me. My story is not unique, there are others who have gone through the same as me”.

Professor di Florio then asked Laura what treatments she was offered upon diagnosis, and she described the effectiveness of the treatment available for PMDD, including her experience of surgery.

“I’d already lost a lot of years to PMDD, and I wanted to take some time back for myself. It was literally, the only thing left for me to try”.

Listed below is a summary of misconceptions discussed in the webinar.

Professor di Florio referenced the World Health Organisation, and diagnostic systems that identify and classify diseases and mental health disorders, such as the DSM-5, an internationally recognised manual for assessing and diagnosing mental disorders, alongside lived experience accounts (such as Laura’s) when discussing the existence of PMDD.

Those who believe that PMDD does not exist maintain that this is because PMDD is a cultural-bound phenomenon with a strong societal basis”.

However, Professor di Florio presented a world map displaying symptom recording locations, noting that “although non-Western cultures typically refer to symptoms as PMS, the rates itself are very similar- if not higher- than those of similar studies conducted in the West.”

Is the response to hormonal changes always the same?

“It is important to note that all people are different, and the same hormonal changes can trigger different responses according to the person’s sensitivities which can change over time,” Professor di Florio stated.

“One size does not fit all here,” she said.

Professor di Florio used studies from the Royal College of Obstetrics and Gynaecology to illustrate this change.

Perhaps PMDD should be referred to as a plural term to acknowledge the differing of symptoms.

In response to this, Laura highlighted a webinar from the IAPMD that discusses the sub-types of PMDD which can be found here, adding that “symptoms can appear at any point throughout the reproductive life”.

“Tracking symptoms is key to unpicking what is going on,” she continued, directing viewers to a self-screener toolkit on the IAPMD website.

Is PMDD associated with suicidality?

“Whilst suicidality is not listed amongst the symptoms of PMDD, the literature suggests that those with PMDD are at a risk of suicidality,” Professor di Florio noted, referencing various studies that conclude higher suicide rates of women with PMDD.

However, Professor di Florio notes that to compare this with the rates of general suicidality is more difficult as there would need to be a specific PMDD and suicidality survey.

What is the future of research in PMDD?

Professor di Florio notes that her PreDDICT survey uses DNA and genetics which is fixed at birth, meaning participants do not necessarily need to be experiencing symptoms at present, but may have in the past. Additionally, DNA can be collected as easily as providing a saliva sample.

“Using DNA can offer clues into the biology of PMDD. Many variations with small effects influence the risk of developing common disorders,” she continues.

Professor di Florio gives thanks to staff, research participants, Laura and IAPMD, funders, and the Cardiff University team before introducing the Q&A session. Watch the webinar:

Ellie is the Communications Officer for NCMH and the Centre for Neuropsychiatric Genetic and Genomics at Cardiff University.

Subscribe to news
Related Posts
New study: Digital support for young people with their mood and wellbeing
Hormones and my mental mealth: PMDD makes me whole
98% of people affected by eating disorders feel calories on menus will negatively impact them, new survey finds
Finding connection when feeling lonely
Subscribe to our blog